"An Ascension Space is dedicated to providing physical health,
emotional expression, mental clarity, and spiritual wisdom
to all, through the use of ​somatic movement,
​performance art, and holistic education"​​ 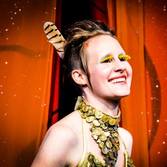 Lynn would best and most simply be described as a Mystic and a Visionary Artist.  Her quest for wisdom into the nature of things began in early adulthood which led her to a Masters in Aerospace Engineering with hopes of one day flying amongst the stars.  After 5 years as an R&D engineer with Boeing Phantom Works, a spontaneous and unexpected “Spiritual Awakening” in 2008 led her to an understand that her academic pursuits where simply her egos way of seeking the Beyond as manifested as “outer space”.  She realized the true journey is knowledge of the “inner space”.  She has been exploring and gaining understanding of this space ever since.

In the realm of healing arts, Lynn began the study of Usui Reiki in 2009 while still a full-time engineer.  In 2011 she left the corporate world to pursue Divine Wisdom of the self full-time and became a Kundalini Reiki Master in 2013.  After living with and learning from Shamans in the Sacred Valley of Peru for 6 months, and completing her first 10 day Vipassana Meditation, she became divinely inspired to being sharing the remarkable gift of Kundalini Reiki in a broader way by initiating others into the practice.  While nestled in the Andes mountains she developed a 3 level compressive An Ascension Space Reiki Training Program with the intention of awakening others to the healing powers lying dormant within their own bodies. Since 2014 she has initiated over 80 people into this lineage while at the same time continuously practicing on and for herself, in order to cultivate the vibration and virtues of her highest self. In addition to a consistent Reiki practice, Lynn has participated in approximately 20 purification sweat lodges and has been a student of Mateo Swan in the Sweet Sundance Medicine Path, she has participated in three Enlightenment Intensives, and sat or served a total of nine 10 day Vipassana (silent meditation) retreats.  She is a constant student of energies primarily associated with Indigenous Earth wisdom, Buddhism, and the “hidden" Divine Feminine aspects of Christianity - relating to the Magdalene and her role in the life of Yeshua.  Although she grew up “Chreaster” Catholic, she no longer ascribes to any organized region and is instead a student of a more multi-dimensional approach to Spirituality via general Divine Wisdom, or Theosophy - “Theo” meaning Divine, “osophy” pertaining to wisdom.  Currently her most influential teachers dwell in the Ascended Master realm and most of her personal growth comes through integrating healing and information obtained through intentional dream work.  She has a respectably consistent reiki, vipassana, yoga, and qigong practices, as well as an organic and vegan diet. This is intended to facilitate the integration of these higher dimensional energies into her body.  She has shared Christmas and Easter meals with sister nuns at monasteries, and trained kung fu with a 34th generation Shaolin warrior monk and looks forward to connecting with more people who share her sense of holiness in the world.

In the realm of somatic and creative arts, Lynn is a life long practitioner and performer.  She began dancing at the age of 6 and trained in classical ballet, jazz, and tap into college. Then, with stars in her eyes of a different kind, Lynn left dance, and physical wellness in general, for about 8 years while she was pursuing her studies in Aerospace Engineering. Her love of dance retuned to her in 2008 as part of her Spiritual Awakening. While still employed at Boeing Lynn became a both a Zumba and a Nia instructor.  In addition, her Divine Feminine roots began to sprout in Seattle after participating in an 8 week burlesque course through which her “higher self” Divine de Flame came into her awareness.  Since that time she has continued to embrace and embody the role of “Sacred Clown” through the performance of dance, aerial arts, and flow arts.  Lynn’s love and passion for flow arts, specifically Ropedart and Contact Staff, tie her to back to spiritual roots in Chan Buddhism. Every training session is a prayer, and every new trick is an offering to Spirit.  Since 2012 she has performed as a LED flow artist, fire spinner, and free-style dancer for small circuses in Sedona, Peru, and Santa Fe, RAW Artist Minneapolis, and she was a featured contestant on season 9 of the hit TV show "So You Think You Can Dance”.  In 2014 she expanded further by producing and performing in her first of many full length cabaret/variety theater shows with themes including “Galactic Goddess Cabaret”, “Naughty & Nice Cabaret”, “Oz Awakened”, and “Light up the Night”.

Lynn is most fulfilled when she is able to share her cultivated presence and healing gifts with others. With her Reiki and other Shamanic healing techniques she has participated in remarkable short-term and permanent transformation with fellow humans suffering from addiction, sexual abuse survivors, and cancer patients.  She is approaching a certain level of mastery over her abilities to move and manipulate energy, within the the bounds of collective consciousness’s, and/or her client’s, agreements about our 3rd dimensional reality. Using her intuitive gifts with her somatic passions she has developed a creative movement class which she has taught to general population youth as well as Somalian refugees, homeless families, and adults with developmental disabilities.  So much healing energy and spiritual communication can happen without words or reiki. Physical and emotional expression is a powerful tool for deep spiritual healing and transformation.

​After over a decade seeking and collecting Divine Wisdom, Lynn has found herself and her humble non-profit in San Diego, Ca.  Integrated and ready to share her energy.  As the fog of the 2020 pandemic beings to lift she hopes to spill out her wisdom through Reiki classes and training as well as performances and creative movement throughout the San Diego area and beyond. Her critical thinking skills and holistic lifestyle allow her to relate to a diverse population and tailor her teaching style to meet the diverse learning styles of her students. She looks forward to dancing and healing with you soon!
I love hearing from anyone who is interest in the work I am doing!  If you have any questions about anything, if you would like a consult about your journey to wellness, do not hesitate to reach out!